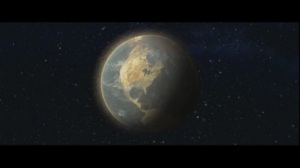 I got pretty bored watching this that i forgot to take the screen shot until the last few seconds.

I don’t like Wall-e and the main reason why is the rubbish 1950’s music peppered and repeated to death throughout it.Who’s the target audience here?Not me anyways by the sounds of it.Don’t get me wrong the animation is on par and the musical score is pretty good but the repetitive stock footage of the all singing and dancing musical numbers just didn’t agree with me.Also with the Disney films there’s always some religious connotation’s that i don’t agree with. Here we have a robot called Eve that lands in his garden or eden and steals a plant.fuck why don’t we just call Wall-e Adam(Automated Detritus Arranging Machine) and be done with it.It’s obvious enough as it is.The only other thing i have a little beef,and it’s minor,with is the real actors used in pieces in the beginning and in the pre-recorded messages for the pilot,yet when we make it to the space station every-ones turned into a comical fat assed CGI representations of humans.One thing i noticed that i thought was a plot hole but maybe isn’t is the whole idea behind Eve getting the plant.I thought they needed the plant to get the co ordinates to get home,but obviously not if eve just came back from there and was was going to blast wall-e back home in a pod.But on second thoughts i think that its that the ship needs the plant to be able to accept the route and fly back.

7
yes
maybe
see if you can catch for the 2001:a space odyess reference,god knows the kids wont