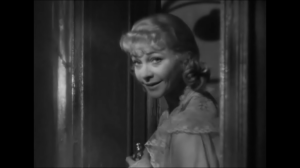 This film got me pretty angry,well the first quarter of it and all because of one woman ;Blanche.She’s conceited ,vain ,narcissistic and a compulsive liar with ideas of grandeur.The films about 2 sisters raised in Mississippi.While one left and moved to New Orleans and had the craic,the other stayed at home and thinks she’s hot shit or a queen.Bitch.Turns out in the end she’s a hooker.Spoiler.Fuck you Blanche.Also she cracks up with herself,seems she can’t distinguish between her stories and reality.Brando is quality in this though.This was wrote as a play,with one set i imagine,and a few things seem off in it as a film like in one scene someone can be having a bath in one room while in the other a bomb goes off and they don’t hear it,while in another a couple are whispering in the house and it can be heard from the busy street.