Another war movie here and i took the liberty to check the Wiki for what war it was this time.It’s WWII.There’s this Japanese P.O.W. camp and there’s a good load of British prisoners here.Let’s say about 200.There’s a Japanese head honcho called Saito and he calls the shots and doesn’t think twice about saying ‘fuck the Geneva convention i’m going to shoot you’.The P.O.W.’s are tasked with building a bridge of the Kwai and have 3 months to do it.So naturally the lads all goof off and work super slow so they will delay the construction.Then there’s a this pompous British asshole Colonel (and how the fuck is that pronounced cur~nel?)who fuck everything up.Firstly he tells the Japs there bridge is designed wrong and placed in the wrong part of the river.This is after the Jap guy says if its not done on time he has to kill himself.He then redesigns it into a super bridge and increases the prisoners work quota.It gets worse.There’s a bunch of British commandos tasked with blowing it up.They plant explosives and plan to blow it up when the first train goes over in the morning.The Colonel is walking along the bridge,last minute checks,and notices a wire,naturally he calls the douche Japanese head buck and tells him the bridge has been sabotaged and someone is going to blow it up.Duh.Christ,the last 5 minutes we pure rubbish,how could anyone be that dumb?He had so much pride in his work he forgot where he was and about the war. 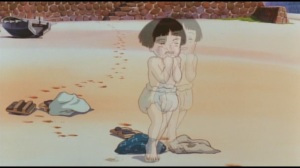 Graveyard for the Fireflys is a Japanese anime film about some war.I wasn’t the best at history in school nor did i care for it so i’m going to say it was a war with America.Correct me if i’m wrong.The story is about a teeanage boy and his kid sister and their struggle to stay alive.Their home is hit in an air-raid and so is the shelter,where his mother was,so they are left with no home and no mother.The father all the while is a naval office fighting the yanks.Thentwo kids grab what they can from their old house and make there way to an aunt.The aunt is  atoatal hardass to them so they say ‘fuck it’ and pack all their things and move into a derelict room/tunnel thing beside a lake.I won’t spoil it for you but everyone dies in the end.Not a bad anime,i think it could work really well as a live action.As sad as this film was i wasnt moved,but a live action version would bring down the house.