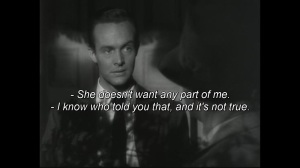 Double Indemnity or as it’s called in Mexico ‘Perdicion’ is a 1940’s film noir movie about an insurance scam where a wife bumps off her husband.I messed up while downloading this film.I went to play it and it was over dubbed in Mexican with no subtitles.So i downloaded some subs and the third ones were in sync.For Double Indemnity the subs were really fast with there being often 3-5 lines of text.The main character is an insurance salesman who works for a big firm.One day while he’s calling to the house of a client to renew their car insurance he encounters his young wife who has ideas of killing the husband.He says take a run and jump,but a few hours later when she calls to his house and he gets the ride then he’s all in.Manipulated or what?They formulate a pretty good plan for killing him and have some solid alibis.The plan goes off without a hitch and it all looks good.But as usual that’s not for long.The film is told as a flashback that only catches up to present time in the last 5 minutes,which i wasn’t expecting. I’m not sure if it’s a good version because of the dubbed/subtitled thing i watched was too taxing on the brain. 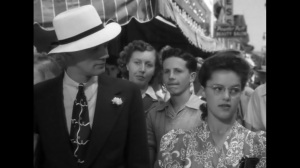 Kristen Stewart?How the fuck did you get in this film?

Another oldie. I’m not sure if things were well different back in 1943 but i initially wouldn’t have thought so but this film seems weird for a few reasons.This one portrays women as blithering idiots who seem content with being just another dumb woman.The relationship between uncle Charlie and his niece in the first half of the film seems creepy and unnatural.The score at the beginning is too much,you shouldn’t need a thousand strong string section to create tension where there is none.My ears were almost bleeding.The film just didn’t work for me : I was totally aware I was watching a film.A shit one at that.