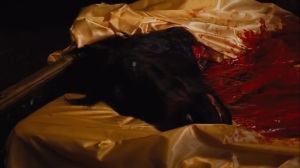 Set in 1945 The Godfather is about a mafia family boss who happens to be the godfather to around a dozen kids.It must sting the wallet at Christmas time.This Mafia boss,Don Corleone, is hot shit and can make virtually anything happen with his spectacular offers that no one can refuse.Anyway this guy wants Don Corleone to back him in this new drug venture he’s trying to get off the ground.The Don declines and ends up getting shot.Then there’s a war.The Godfather has a pretty good cast with Brando, Pacino, Duvall and Caan to name a few. I’m sure a few other ones will pop up in part II.The Dons favourite son,Micheal,takes the reigns after the shooting.The Godfather is by no means a fast paced film,its miles apart from Goodfellas or Casino but i guess that’s one of the aspects that appeals to people. I’ve never seen a Godfather film before and it’s seems okay,but just okay.There was a couple of lines that made me laugh,one in particular is when they shoot the guy the car and the guy says “leave the gun,take the canolli”.Right,now to watch the  part II.

One of Halle Berrys earlier works.

The last Leone film on the list and it starts in true Leone style.It’s got a cool title sequence,with animated text and what not.It’s also got all the other bucks form his other films,Van Cleef,Eastwood and the guy who had the musical watch in the last film.The beginning has his familiar beginnings;a few cowboys walking around,some good close ups and not much chat.In fact it’s 10 minutes 30 before the first word is uttered.Tense stuff.This one’s set during the civil war and revolves around 3 characters , The Good – Eastwood as Blondie (doesn’t even have blond hair), The Bad – Van Cleef and The Ugly – the fat guy.Blondie and the ugly have a racket going.The ugly is wanted and Blondie captures him and gets the bounty then frees him and they split it.About the middle of the movie Blondie ‘and the ugly find out theres $200,000 hidden somewhere.Each have half of the puzzle and are keeping it to them selves.The Bad also knows about the money and tries to muscle in.It’s a good old story,I’m not sure if it warrants a full 3 hours but my d/l said it was an extended version so maybe it’s shorter normally.As always there’s a mad soundtrack to this,Leone really goes all out.I think my dad had it on C.D. when i was a kid.I thought of a good drinking game for this film. Every time someone shoots a hat take a drink.You’ll be drunk in no time.

Smeagol goes all Prince and adds some symbols to his name.

Four hours and ten minutes.Four fucking hours and ten minutes.Let me tell you this;normally when i see a film that runs 3 hours long i get a bit ,eh, apprehensive .Normally i like to have a beer or two when i do these reviews and i think after 4 fucking hours i don’t think i could do it justice.Fuck it I’ll try any-ways.During the film i opened up a Notepad so i could jot down some notes encase i was too drunk to remember.Here we go.Firstly Seagol takes them to this “secret stairs” which is about 5 metres from the main entrance and totally obvious.Second a little thing called a major fucking plot hole-When Seagol had the ring he didn’t age.He grew to be over 500 years old.Yet when Bilbo gave the ring away he aged like fuck.He’s nearly dead by the end.Sure Bilbo had the ring for like 70 years why didn’t Seagol die?Horseshit.Next.Not a plot hole but somewhat disconcerting,King Thedins army have a chant which is  “Death,Death,Death”.Here buddy probably not the best chant going into battle eh?And now I’m going to pick a few things that happened after the battle sequence.First Merry killed at least 6.So he was worth six men.Them Olephants were fucking cool as.Aragons accent was a bit weird throughout the trilogy for words like ‘our’ and ‘your’,they sounded super Irish.Maybe he was shooting two films at once.And lastly the lighting at the end,it’s night it’s day it’s a mega cloud it’s bright as fuck.Bad lighting bro.But i’ll leave it at this;that scene where they all bow to the hobbits ,i got teary. 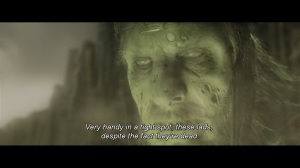 I’ve never had two pics to a post but this cracked me up.It’s like something an Irish buck would say. 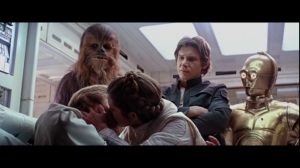 Drop of incest on the go here and by the looks of Hans face it looks like he could be Hand-Solo yet.Get it?Hand-Solo?No?

Like the Lord of The Rings trilogy I’m just after watching these jumbled up again.I think it was third-first then second.This one was my favourite.Comparing it to the first one,this looked way more polished and the special effects were a step above A New Hope.The over all look of the film was great,a lot more crisp i thought.I was looking to see if there was any difference between the camera or processing specs for this and A New Hope and all i could find was this one had Panavision.Maybe i just had a low resolution version of the previous film.About the film,well we have all the cronies back together and still hanging out with the rebels.The opening scene i burst out laughing when Luke gets a slap in the face from a Yeti.Yes a fucking Yeti.Darth Vader is at it again and is hunting down Luke to try and make him join the dark side,but Luke’s off training with Yoda. Yoda is one weird little fucker,hard to get a straight answer out of him and he pisses off Luke by acting like idiot.On the whole a good film,Lucas took a step back from this one and i see him with only two credit-Story By and Producer all the rest like screenplay and direction are by other bucks.

Benico Del Toro plays an Argentinian smuggler here and his accent is fucking hilarious.The scene when the 5 guys first meet in the line up is quality.They’re all given a line to read to the person on the other side of the mirror thing and his version is the funniest.The Usual Suspects is a good film and all but i think it’s too high up the list here.I think it’s here mainly because it’s a bit original.None of the actors stand out and the there’s no crazy camera angles or effects.So it’s got to be the script.Spacey stars here as the narrator the story which jumps between his version of past events and present time,where he is being interviewed by a cop.Steven Baldwin wasn’t the worse in this,he kind of disappeared off the map after this and they missed a trick with Gabriel Burn by not having some sort of I.R.A. tie in what with him being Irish.Looking over the credits for director and writer and all that there’s nothing that sticks out to me,maybe the film was a fluke.Also there’s no re-watch value in the film,once you see it once i don’t see what you can take out of it a second time I guess the same can be said for Fight club,once you know the ‘secret’ it’s not the same.Both entertaining none the less.

Bras were so much pointier back in the days.I mentioning this because of the scene at 11 minutes in,but i’ve noticed over a good few old or 50’s era films the bras or shape of a womans cleavage was pointier.You could take an eye out with one on a cold day i’d bet.Psycho is about a guy who runs a motel that’s off the beaten track who murders and kills young(ish) women.The woman in question is a secretary or something like that,who decides to steal $40,000 a client leaves in the office to pay for a house he’s buying.On the spur of the moment she decides to steal it and drive off.Drive to where?We never have a clue,i think we’re in the same boat as her.There’s some really dumb bits in this film.She’s being watched by a cop so she pulls into a used car garage and trys to swap her car and buy a new one in about 2 minutes.I think in reality if i were to trade in my old car the garage would want their mechanic to give it a look over wouldn’t they?Psycho doesn’t follow the Hitchcock formula of a perfect crime,it’s pretty much the opposite.It’s just about a nutter.Norman is a hard one to figure out;one moment he looks confident and is cracking jokes and other times he’s nervous and looks anxious.I guess that’s meant to highlight his psychosis or schizophrenia.Peep holes,oh shit don’t get me started on the peep holes in the film.If you were to make a peephole how would you go about it?Drill a small hole,cover one side with something so they don’t notice?Nope,make a hole the size of a XXL pizza one one side of the wall with a small hole on the other.Jesus. 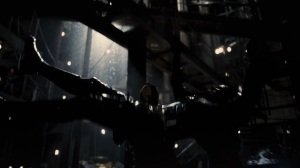 BACK BREAKING SHIT YO!

Another Nolan film here,this ones also got his brother Jonathan as a co-writer.Running at around 2 hours 40 it’s a long one and for me i definitely feel it.The first time i went to see it i was dozing off.When it was just out in the cinema one of the guys was going to see it for the 6th time in a week.I said i knew how he felt i couldn’t stay awake for all of it either.This seems like the last Batman film with everything tied up in a nice bow at the end.As far as i know Nolan is stepping back from the franchise but he’s buggered it up for the next guy;he’s used up the baddies already-Bane,the Joker, scarecrow and Two Face.In this film we’re introduced to Cat-woman aswell. When i heard Anne Hathaway was going to be in this i thought ‘shit’ but i was pleasantly surprised.She’s not bad,no Michelle Pfeffer but who is?Now let me get to Bane,Banes story isn’t long.He got his face messed up and a morphine addicted doctor screwed up his reconstruction surgery.I think.For some reason also he has the strangest accent that you wouldn’t associate with a villain living down a hole in the middle of nowhere.His voice reminds me of Patrick Stewarts.I’m just after going through the credits again to see if there was a voice actor for Bane and there isn’t.