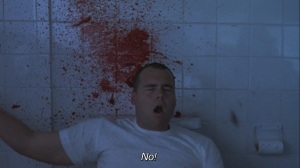 Yet another Vietnam war movie here.Here with Full Metal Jacket we have Kubrick taking a stab at it.Everytime i watch this film i always think of it as two seperate films.One part showing the struggle and failures of military training then the second part is a gritty realistic brutal war story.When someone asks if i’ve seen FMJ i only remember the the first part and completely forget the second.Maybe i prefer the character development to the action and shooting either way the film as a whole is not bad.Kubrick wrote,directed and produced this film,basing the screenplay off a novel.The plot follow a few young guys as they join the army go through an 8 week basic training and then get shipped off to Da Nang or somewhere like that in Vietnam.Some become infintry and others war journalists.The film has some choice tracks from the era to set the scene,Nancy Sinatra and a few more,not so many that you’re bombarded with music(take a hint Guy Richie).