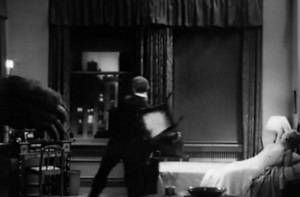 And so it begins.First film to kick it off was this beaut,King Kong.Not a bad film overall it has some good action scenes and good cut aways for an old film and a few funny bits that still work on today’s level.The score works well in places but in other parts it can be a bit heavy and bits would have worked better if they toned it down a little. I’m not sure if you’re familiar with the whole story but it’s about this David Attenborough type buck who got a map to an island where’s there’s a giant beast.So he decides to go there to make a film,but at the behest of film reviewers he needs a ‘flapper’,some eye candy,to make the film sell more.They go to the island, Kong grabs the girl and they chase him to get her back.It’s all mad craic.
I just had a few beefs with the film.